On The Ground – Assessing the impact of Brexit on business travel

This is the third in our series of blogs on the impact of Brexit on business travel and a timely day in which to delve into border concerns for corporate travelers.

As the European Council Summit is underway, a critical issue for both sides of the Brexit negotiation is the “Irish backstop,” an insurance policy to ensure  the border remains open to trade, people and services in the event of a No Deal Brexit.

During this time of uncertainty, clear insight into life at the borders and ease of mobility is precisely what business travelers want. “Travelers want to know how their day-to-day lives will be effected,” says Johan Wilson, VP and Country Director UK & Ireland, “How long the queues will be at the airport and the paperwork they will need to hire a car. They want concrete facts amidst the speculation.”

For now anyway, concrete facts remain elusive. This is not a simple process. If the UK Government can negotiate a withdrawal agreement with the EU there will be a transition period after 29 March 2019 (Brexit day). During this time most aspects of UK membership of the EU will probably remain the same, including free movement across borders and membership of the customs union and single market.

If the impasse on the Irish border continues in October or the two sides require more time, there could be an Emergency EU Summit followed by a Council Meeting in mid-December, the current deadline for the negotiating teams to come to an agreement. If no deal is reached, there could be bilateral agreements based on World Trade Organisation (WTO) terms on areas including aviation.

“What we’re looking at is a ‘what if’ scenario,” says Wilson, “It’s always best to remain positive and focused, but prepare for any eventuality.”

In the UK there’s a growing movement for a final say on the deal, and a people’s vote. UK MP Rupa Huq from the People’s Vote campaign told The Independent in September, “No-one voted for a Brexit that results in flights being grounded or the Eurotunnel being closed down.”

Indeed it’s in nobody’s interest and remains an unlikely scenario. Our advice remains to keep an eye on unfolding negotiations and regulatory insight while looking at key areas for business travel. Based on governmental notices, we’ve prepared a checklist that outlines some potential changes that may occur in the event of a No Deal scenario. In our next post, we’ll look at the potential impact on Meetings and Events. 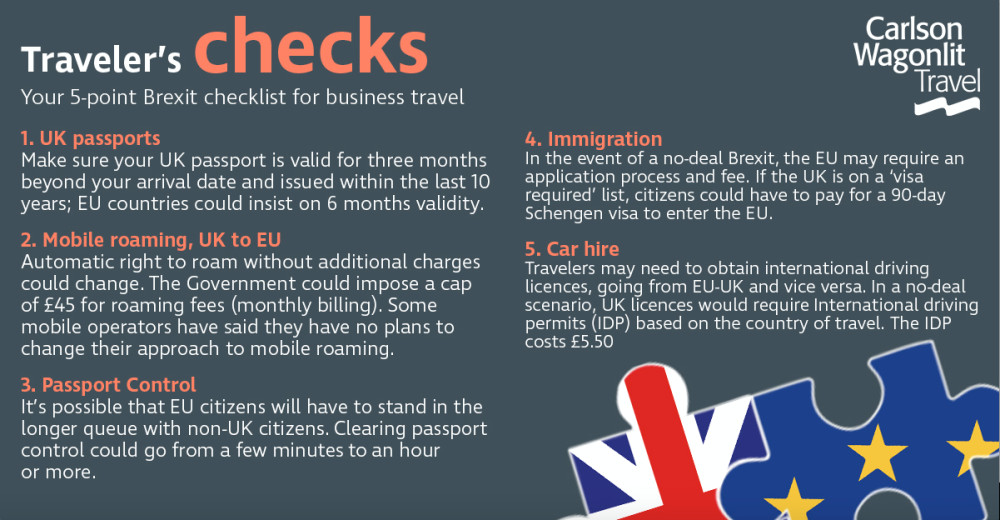