Meetings & Events industry costs on the up, trends to watch in 2018 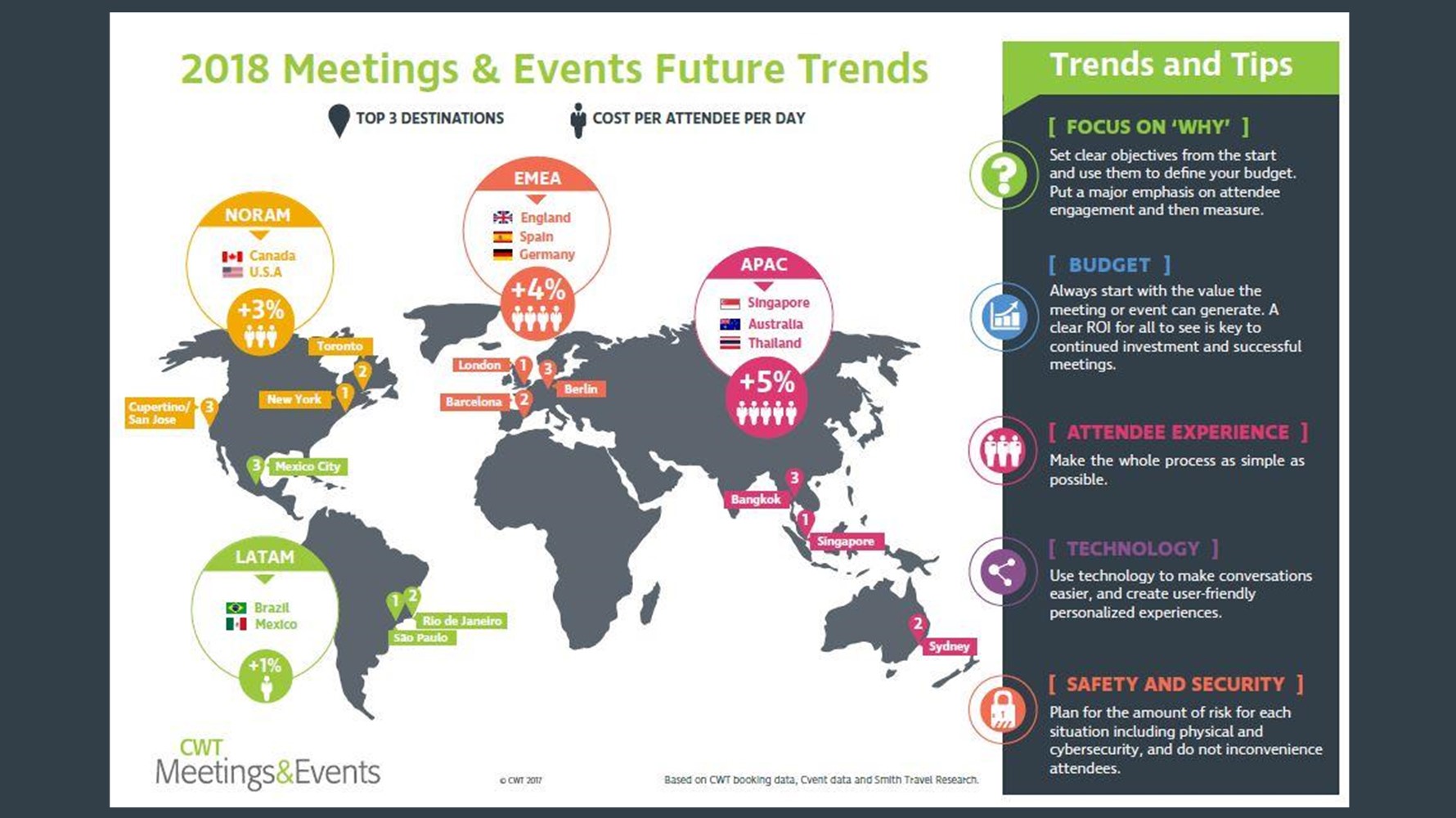 The overall cost per attendee per day for meetings and events around the globe increased in 2017 and is expected to continue rising next year, according to the 2018 Meetings and Events Future Trends report.

“Costs are rising in key M&E markets, globally,” said Cindy Fisher, senior vice president and global head, CWT M&E. “With a 3.7% increase in hotels and 3.5% rise in air fares projected for the coming year, that trend is likely to continue.”

This will have a significant impact on some of the top destinations: certain popular venues may see drop-offs next year. For example, the top three global destinations for meetings and events in 2017 were Paris, São Paulo, and Rio de Janeiro.

The global airline industry’s capacity is expected to grow around 7% in 2017 and 6% in 2018. The segmenting of air fares is broadening the appeal to travelers as they are able to purchase from options including a basic economy restricted fare or various upgraded fares, with specific service options. As for hotels, there is a progressive push from suppliers to move corporate buyers away from fixed, negotiated hotel rates and toward dynamic rate pricing.

Going beyond statistics to the root of what it means to hold a meeting or event, this report also explores the latest industry trends and recommendations: The top five being:

Hotel prices are expected to increase in 2018. On top of that, domestic leisure travel has been increasing, meaning some hotels and resorts may limit group blocks at peak times.

According to CWT booking data, the top 10 destinations for meetings & events in North America in 2017 are:

Destinations such as Hawaii, Washington DC, New York and California’s wine region remain popular for meetings and events. We also expect to see a number of places in Arizona becoming more popular as new hotels come online in 2018. However, as long as demand outstrips supply, we’re unlikely to see much change from 2017.

The cost per attendee per day for meetings and events in Latin America has increased by 1% in 2017. In 2018 we expect both hotel and airfare costs forecast to undergo nominal growth across the region, with some notable local variations.

Looking at hotels, a trend in the region – particularly Argentina – sees event organizers forfeiting luxury accommodation in exchange for better food and beverage options, enhanced Wi-Fi and more flexible services. This is driving demand in midscale hotels across the whole region. We expect venue costs to increase by 3-to-5% in popular markets like Colombia and Mexico, while the overall figure for the region is for venue costs to increase by 2%.

According to CWT booking data, the top 5 destinations for meetings & events in Latin America in 2017 are:

In 2018, we expect there to be an estimated 20% reduction in group sizes in Brazil due to the weakened economy as clients with less budget are looking to do more domestic events. Rio de Janeiro is set to host many events, buoyed by the new hotels and venues following last summer’s Olympic Games. However, there are major security considerations which will slow the city’s growth as an event destination.

Large scale hotel developments and refurbishments in Colombia are making it a desirable destination for the US M&E market. For instance, Medellin’s hotel accommodation is improving considerably, as are its convention centers. The coffee region is increasingly attractive because it is different and the costs are low.

Other lesser known destinations are beginning to make their mark in the region including the exotic – but still accessible – Atacama Desert in Chile, as well as Iguazu Falls on the border between Argentina and Brazil.

The cost per attendee for meetings and events in Europe, Middle East and Africa has increased by 4% this year. Costs are increasing slightly while the economy across the region is flat, once you take inflation and currency fluctuations into account. In real terms meeting and events costs are going up incrementally, and this is expected to continue into 2018.

That said, Brexit could mark a major change for most of Europe. To date, the main impact has been to attract people to the UK due to the reduction in value of pound sterling. But it is too early to define what the ultimate impact will be – we’ll have a better idea by 2019 when the UK is scheduled to formally leave the EU.

The EMEA hotel market doesn’t have the same pressure on supply as the Americas. It isn’t much of a seller’s market, and hotels are unbundling costs. There is a move away from agreed-rate programs to rate caps as well as a shift from day-delegate rates to rates based on rooms, food and beverage, AV and so on.

According to Cvent data, the top 10 destinations for meetings & events in Europe, Middle East and Africa in 2017 are:

It is impossible to ignore the impact of safety and security when it comes to venue selection in Europe, Middle East and Africa, with many countries being unavailable. Terrorist attacks in Barcelona, Berlin, Brussels, London, Manchester and Paris all have an impact as well, even if in the short-term.

Against that background, Italy and Portugal are becoming more popular with its reasonable pricing. Germany and the UK remain as popular as ever. Specific cities such as Berlin, Dusseldorf, Cologne and Vienna are attracting more interest.

There are also new destinations emerging particularly for the incentive market, led by Bordeaux, Toulouse, Palma de Mallorca. They are developing new structures and facilities, and have either existing or new travel connections, and offer low prices.

The cost per attendee, per day for meetings and events in Asia Pacific increased by 5% in 2017. Prices aren’t changing very much in Asia Pacific, for either hotels or air fares, with increases of 3.5% and 2.8% respectively.

Hotels largely remain the venues of choice across most of the region, particularly in China where new hotels open every week. Australia and New Zealand are outliers in the region in this respect as they haven’t seen much hotel development recently so there is more demand for unique venues.

Despite ever-increasing hotel stock in China, prices are set to continue to increase because of demand from both business and leisure travel.

According to Cvent data, the top 10 destinations for meetings & events in Asia Pacific in 2017 are:

Overall in APAC, security is limiting people’s desire to travel as Indonesia, Malaysia, the Philippines and Thailand all have some geopolitical challenges. Despite the threats, Thailand’s government is working hard to encourage people to continue coming, and the increasing number of visitors shows the impact local authorities can have.

China’s hotels are both innovative and hungry for business, with lots of different players and many hotel chains. The Chinese government’s policy of only using local hotels has further pushed down prices, which, combined with a relative absence of security concerns, has made China a good location for meetings and events.

Singapore remains a hub for meetings because of its abundance in relevant space and excellent air links. South Korea and Vietnam are emerging destinations especially as Pyeongchang, South Korea will be hosting the 2018 Winter Olympics next year.

Taiwan is also on the way up, though harder for Chinese citizens who need a special permit to travel there; that restriction will mean hotel prices remain stable, even though new hotels are opening, which is always a driver.

Tokyo has higher costs than other areas of Japan, even though it has great connections. Kyoto, Okinawa and Osaka are growing in popularity, particularly for people from APAC because there are direct flights.

Companies and governments rely on us to keep their people connected. We provide their travelers with a consumer-grade travel experience, combining innovative technology with our vast experience. Every day we look after enough travelers to fill almost 200 Boeing 747s and around 100,000 hotel rooms, and handle 95 corporate events. We have more than 18,000 people in nearly 150 countries, and in 2016 posted a total transaction volume of US$ 23 billion. 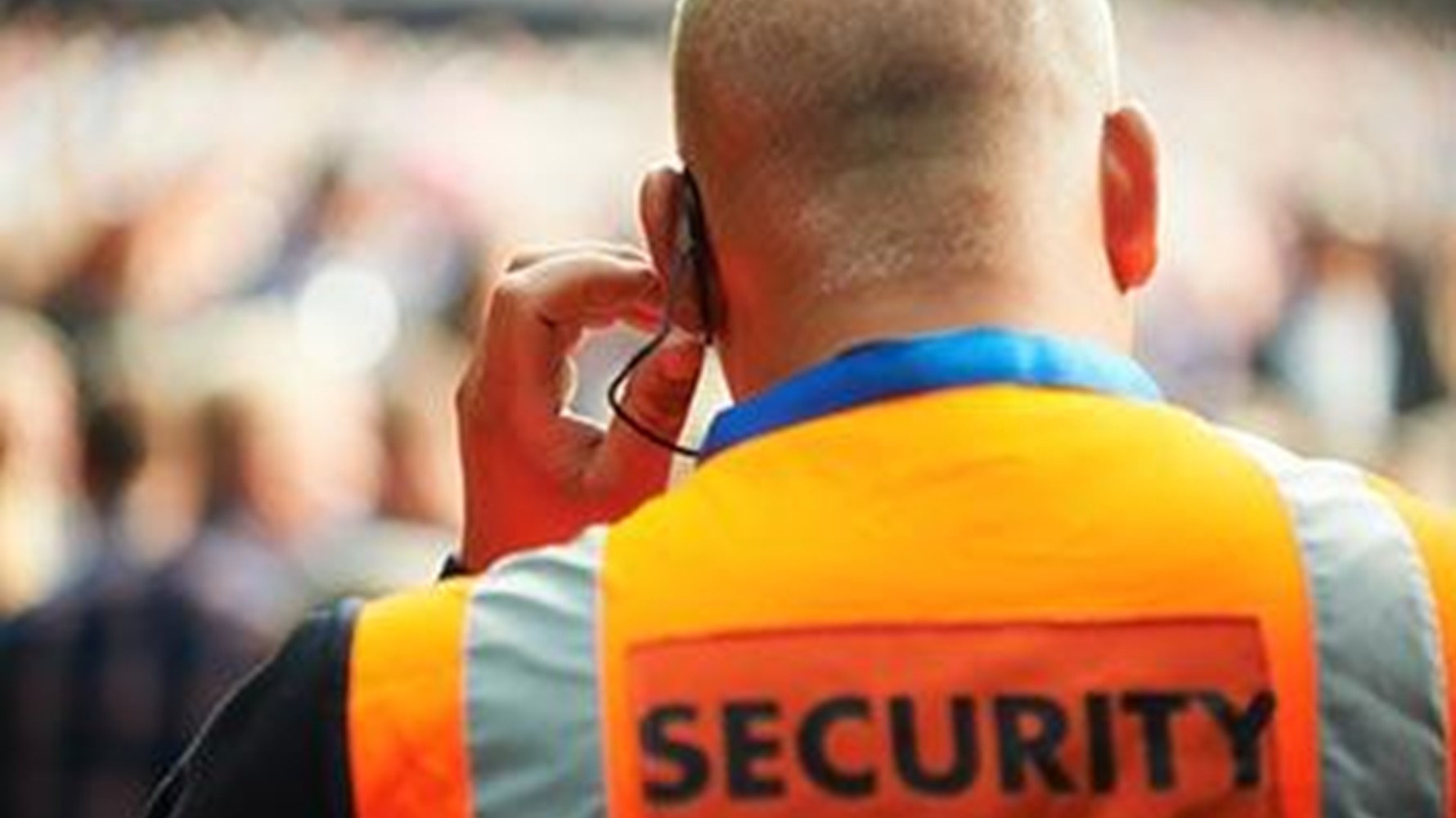